It is alleged that, last night the ''Kerere'' singer Gravity Omuttujju threw bottles at Dj Ciza while he was on his duty at Kyambogo University for the Fresher's Party at campus premises.

And Dj Ciza had to go on his twitter page this morning to tell the story.

He tweeted: ''Aye! @GravityOmutujju threw a bottle at me a few hrs ago - had to get escorts & shit for fear of his kadeyideyis - Wow! I love UG music but not at that expense - Fuck Off !! We can move without that. Playing at KYU University again ?! Was so very excited but wah - Never again!'

This was enough to wake up his fellow Djs from the Djs Association Of Uganda who came up bitterly to rebuke the luga-flow artiste.

Now from it seems like, the Djs have resolved their stand and have decided to first put Omuttujju's music on a mute mode.

Here is the art work of this campaign to mute Omuttujju unless he comes out and apologizes for his actions..... 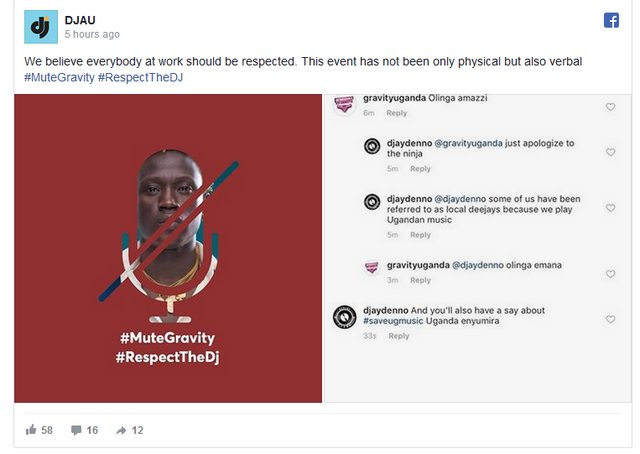 Warom Patrick Delivers Poultry Feeds And Lights To Beneficiaries Under His Lobbing Scheme.