Promising Arua based Buffalo Camp signed artist West B Theafricanvoice as commonly known is currently living a fearful life after he reportedly exercised his Constitutional Mandate which encourages Freedom of Speech & Expression.

West B who about a fortnight ago made a post demanding for accountability for the recent loss of Ambulance from Arua Regional Referral Hospital is reportedly receiving threatening feedback after his post as copied below from his Facebook account; 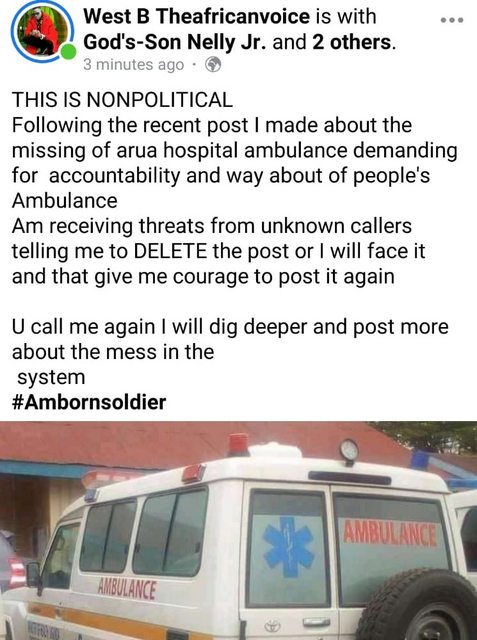 "WHERE IS OUR ARUA HOSPITAL AMBULANCE?? I spent most of my day today in Arua hospital I interact with so many patience and those around them,I learnt a lot how so many patience are mismanaged I feel so much pain in my heart as an ordinary human being How can you send a critical injured unconscious  patient to go for x-ray service out side in private clinic ??? Yet she knew she had no money that made to cross to Government Hospital How can u tell a patient the Doctor for x-ray isn't around ??? How can u tell a patient the machine isn't working and why?? It makes me realise that its true there's mismanagement within the system If the big hospital ambulance can get lost without proper follow up what do you think is happening inside We need accountability We need the way about of our Ambulance Our innocent mothers are dying in the villages THAT'S MY MIND"

www.westnilexpozed.com can not However independently confirm whether West B has reported the said threat to Police for investigations as he couldn't pick our repeated calls.