Naks Is Too Broke To Fire Me - Wyne B Allegedly Reveals

As we sounded the drum of departure of Whyne B with Naks Manager yesterday, we had to dig deep deep inside the whole fall out story.

However, the soft-spoken RnB artist says, he was not fired by Naks and he will never be fired by him since Naks never at any point footed his bills.

‘Naks will never fire me because I was simply working with him as a brother to push my music online’’, Whyne B

Sources also reveal that, Naks and Whyne’s fall out begun around 11th of this month November 2020 during the music video shoot of Sweat Baby where Naks faked Whyne and failed to keep his promise. It is said that, according to plans, Naks had accepted to pull some money to carter for the video but on the day of the video shoot when the money he promised to add was wanted, Naks simply disappeared and failed to pick Whyne’s phone calls. Whyne B had to look for him but Naks kept his identity hidden for almost a week. This annoyed Whyne B and looked at cancelling their management contract as a way of ending their work relationship.

It is also true as seen in the contract form signed by Naks management and Whyne B, Naks was only mandated to act as the promoter and not financer of Whyne B. 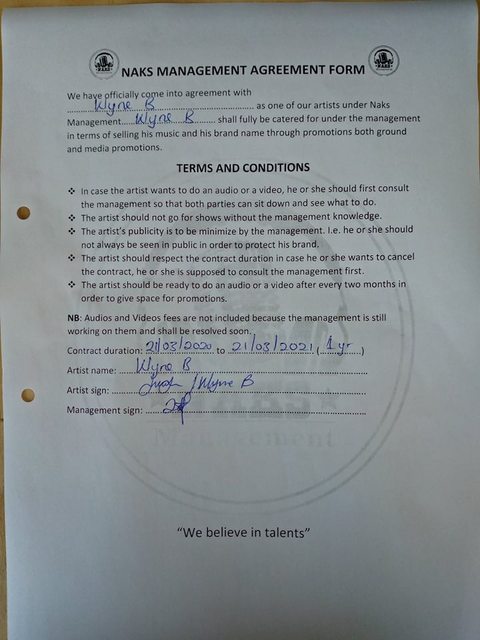