The close of September month will forever live in the hearts of many & West Nile entertainment sector after a coincidental incident where legendary Artists Chandiru Leila & Jerry De Peacock of the now Faded Peacock Family both lost their mothers respectively.

According to an earlier Facebook Post, Jerry who confirmed the mother's departure as she was having her breakfast thanked God for giving her mother to the world so as to accomplish her earthly mission before going for the current final Rest.

Similarly, Female music maestro Chandiru Leila has taken part of her sorrowful moment to bid farewell to the now late mum whom she described as having been the Best friend, Advisor, Joy & the Only Parent she grew up knowing since she Fit in the shoe of Dad & Mum.

The late mother to Chandiru who died this morning due to Stomach Cancer was Peacefully laid to rest immediately at her home Within Ediofe-Gili Gili Road. 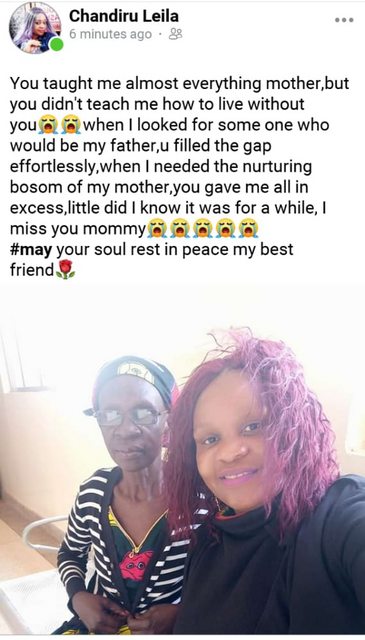 we at www.westnilexpozed.com wish to extend our heartfelt condolences to the family Westnile entertainment fraternity & Family of both Chandiru Leila & Jerry Peacock whose mother is yet to be laid to Rest.