The industry is turning bloody; these are some of the words that came out from Nebbi town’s most celebrated radio presenter, Verrati Da Classic man of Rainbow Fm.

Sources allege that, the presenter was last Saturday 26th September 2020 attacked by a group of people believed to be belonging to Lucky Dee’s Trouble Base camp during Lexyn Manager's birthday party at one of the joint within Nebbi town.

It is said the group came at the party and demanded to meet Verrati for a small private talk at a corner.

However, Verrati declined to their demands and requested them to reveal the content of the meeting before he could allow, since the corner they were calling him at was even darker. The team refused to reveal the reasons for the meeting, something that prompted Verrati to reject the request for the meeting. The rejection got the team pissed off.

A heated exchange of words then took shape between the two parties until people came in and separated them.

Westnilexpozed.com had been treating this as a rumour but, from sources seen online posted by Verrati, the truth might hit us sooner than later.... 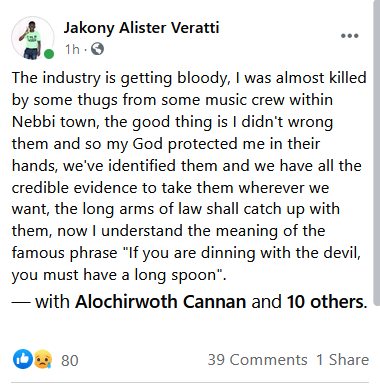