As the Social Economic situation presented by COVID-19 continues to bite hard on Businesses established, One of the Biggest Transport investment in West Nile has not been spared as it becomes the first Transport Company affected in West Nile.

As per an insider from KK Coaches, The company has called off its Operations thus laying off all it's workers with exception of the Security officers.

According to a termination letter witnessed by www.westnilexpozed.com signed by The Group Human Resource Manager, The decision was made following Senior Management meeting that was held within the month of May where it was noted that; Owing to the high costs of running business comprised of Old fleet of buses & further extension of the countrywide lockdown that has resulted Into absence of generation of income, a decision was taken to restructure the staffing levels of the company by downsizing.

Our efforts to get an official comment from the Company Human Resource Manager, Mr Edema Stephen was futile as he declined to make a statement on the matter thus promising to refer us to a person in an above position which has since been unsuccessful.

www.westnilexpozed.com can confirm that The terminated Staffs have been requested to hand over all company properties in their possession as terminal dues will be availed in due course as the business opens up.

KK Coaches that started transport Operations in 2008 has been responsible for safety of Passengers, Parcels & Luggages offering daily services of transportation from Kampala to West Nile towns of Paidha in Zombo District, Arua & Koboko via Karuma, Pakwach & Nebbi besides having a temporary route in Northern town of Gulu.

The company recently received Recognition & Praises from the Head of State during one of his Address after the company donated 400 Mattresses through the Covid-19 National Task Force to be used in all West Nile hospitals as the country contines to battle Corona Virus. 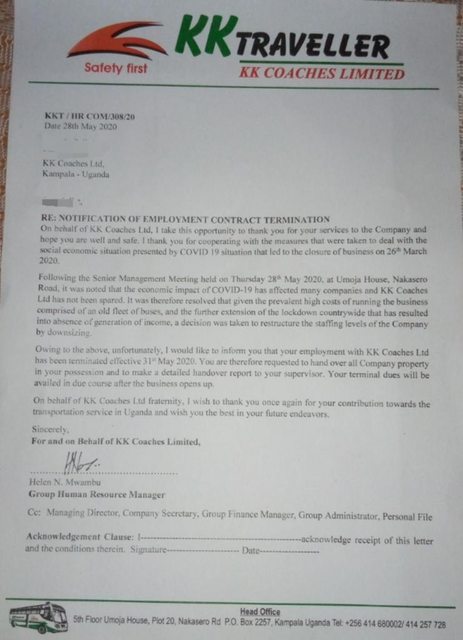 We shall keep you informed on what next.

I Only Wanted Their Money- Bad Black Speaks In Red

Arua Based Joshman Perfection in tears on his Birthday