Ever since the Corona Virus COVID-19 pandemic hit hard with some referring it to World War 3, Life has never been the same for many further putting different Sectors in losses. Entertainment Industry could not be spared either as one would attribute this as one of the reasons for temper flares from left to right in WestNile. Last week after westnilexpozed.com ran a story about Westnile Born-Kampala Based Bon Viras De Seabon who took the advantage of the Freedom of Expression as Provided in the Constitution of the Country to air out his Feelings about some of the Corona Awareness songs from Westnile being Naggish & Boring, As I would be Expected, this didn't Go well with a number of Arua based Artists like Vanmatic Pro, Fedel A Pass, V Click, Darwin Sly among others who slapped him back with attacks as others asked him to compose his version to prove he can sing better other than criticizing the works of his Arua based Counterparts.

The Mechanical Engineer/Artist this Evening took some minutes off his Quarantine Minutes which he could use to Sanitize or wash hands to reply his Comrades in a moderate post saying he sings for fun, not Media Plays, in other way he's a music fan.

He further asked his Arua Comrades to copy the neighbouring Alur & Madi Entertainment that is growing rapidly because of Criticisms as we copied below; "MY RESPONSE TO SOME ARUA BASED ARTISTS, TALENT MANAGERS AND PROMOTERS. since my last post criticising some Corona Virus Awareness songs as being boring, fake and lousy I have seen a number of replies with some asking me to do my version. First and foremost am a Mechanical Engineer by profession not an artist.

I sing for fun not for radio/tv plays in other words am a music fan so whatever is good is good and bad is bad I hold no Apologies to anyone over my other post.

Truth be told, the songs I listed are good and ear friendly and the ones I didn't must have had errors in one way or the other so cross Check your selves.

Music from neighbouring Alur and Madi are growing rapidly and at supersonic speed, because they take criticisms positively to adjust thus growing so my dear Aruans don't always expect positive responses to your outputs otherwise there is a saying in Lugbara "isakua lu I'ma eti isiku" and "pati obo mimileari bazini epeni" not all artists who leave Arua for Kampala come to look for musical green pastures, some of us are here for professional works and carry music as part of our leisures.

Accept and progress" With his Post, Our ears are on ground to to follow up how the comrades will swallow this & Keep you Posted. 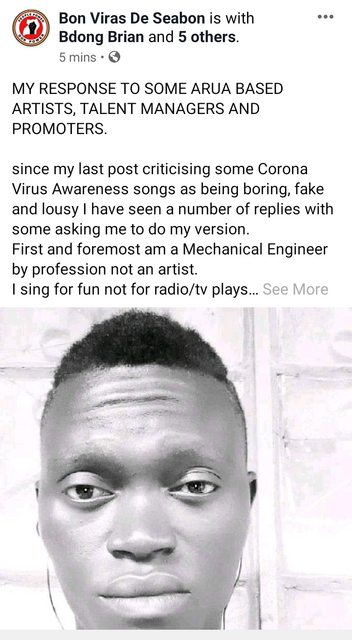