I Want Your Tattoo On My Private, A Female Fan Begs Eddy Kenzo

BET Award-winning Ugandan singer Eddy Kenzo was left blushing after one of his diehard female fan begged him for a tattooed on her private parts.

Blessing Tarshillah a.k.a Meghan wa Harry (on Facebook) gave Kenzo and social media the boost after placing this romantic request to the singer.

This came after Eddy Kenzo posted a shocking photo of one of his fans with a tattooed ‘’Eddy Kenzo Musuuza’’on the left side of her upper back. 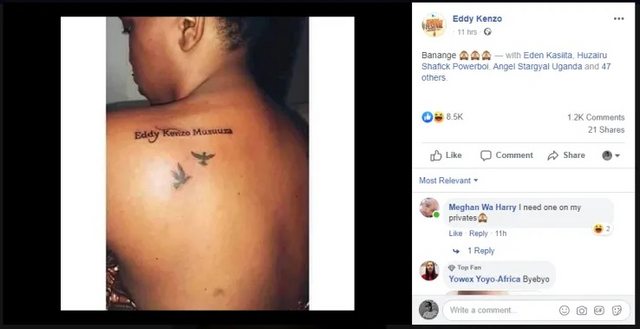 Ugandan music fan have been extreme in showing their support for local celebrities and that only seems to be going deeper, as far as having celebrities’ names permanently tattooed on their bodies.