"With the stiff competition in the entertainment Industry, Artists are busy spending sleepless nights to make ends meet as rumour mongerers & haters are busy fighting & turnishing the the name of those who pay little attention to them" These were the words of the Fast rising Alur Artist Ricky Ondukupala after a Reckless fan ran a false story about him in one of the Most followed Facebook group claiming He was arrested on Orders of the R.D.C for Singing a Violent inciting song called "Nebbi Ngeyu wege" loosely translated as "Nebbi Knows it's Owners" that has lately become a Slogan for Hate Speech.

While Speaking to this Website, Ricky Said, By the time of running the Story, He was home & offline.

His Presence on social media by the close of day raised alot of suspicion as Friends, Fans & Well wishers flocked his inbox with inquiries & Sympathies. www.westnilexpozed.com is however yet to find out the real move behind the Post Since one can easily attribute this to a planned move of attention seeking as most Entertainers can do anything for Showbiz & fame. 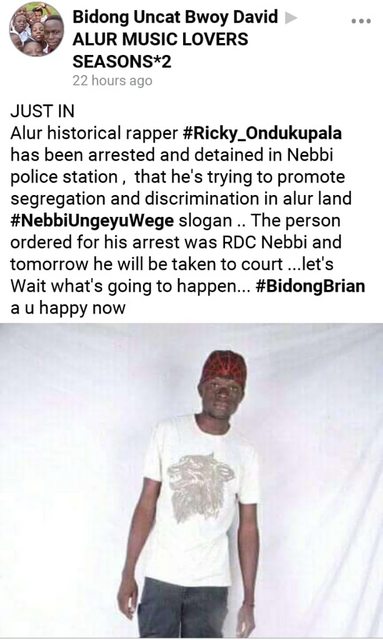